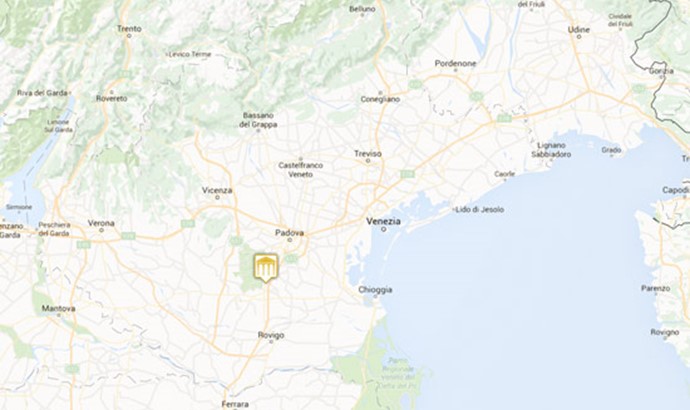 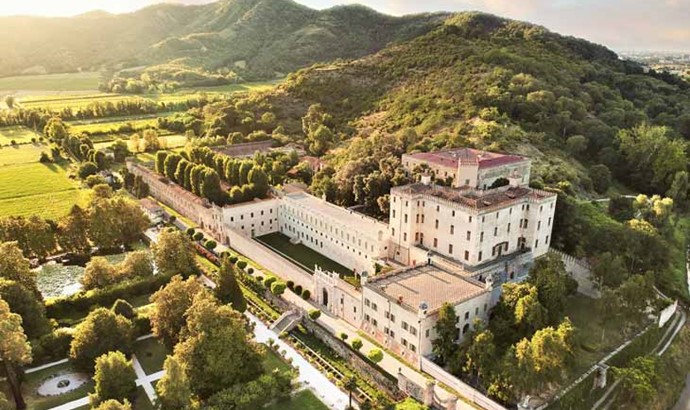 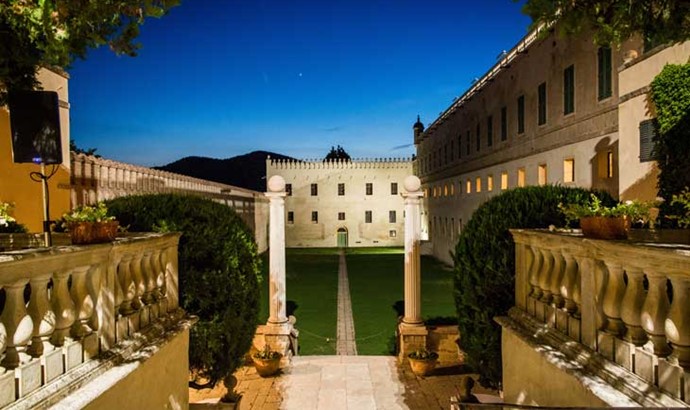 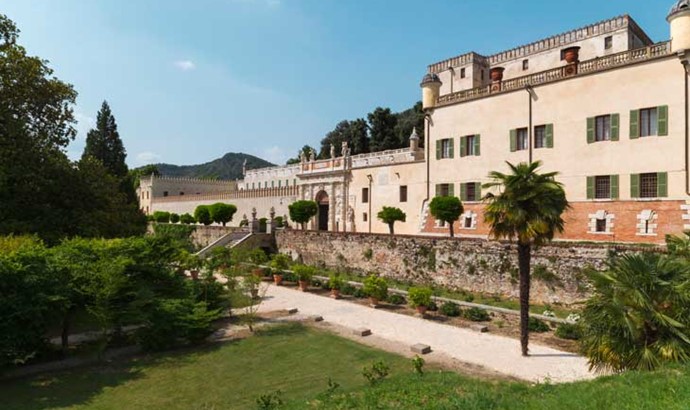 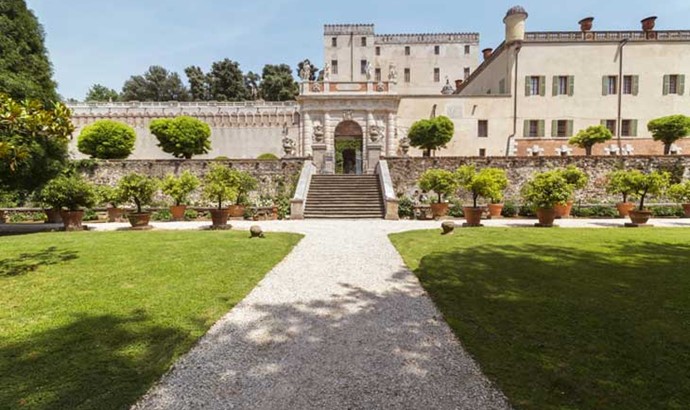 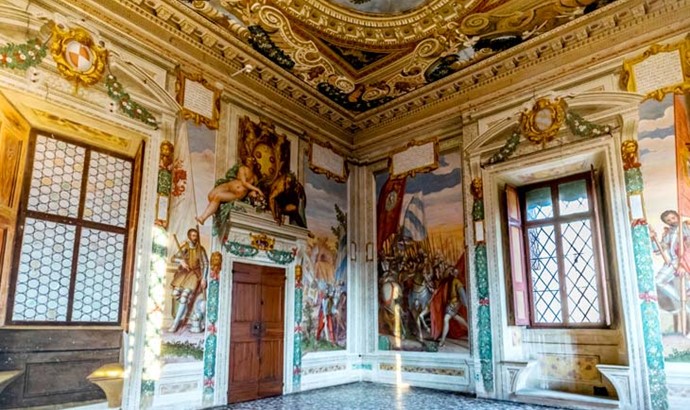 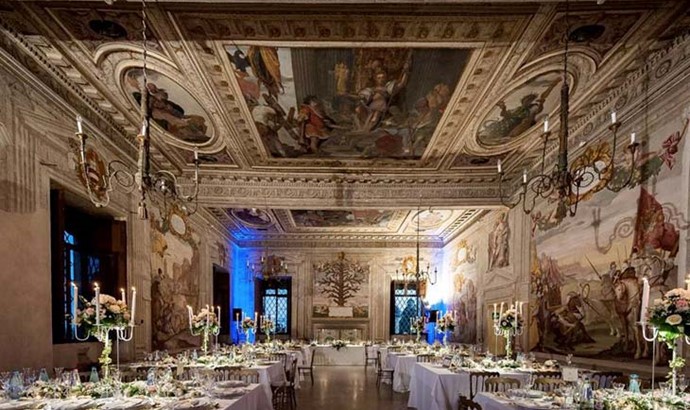 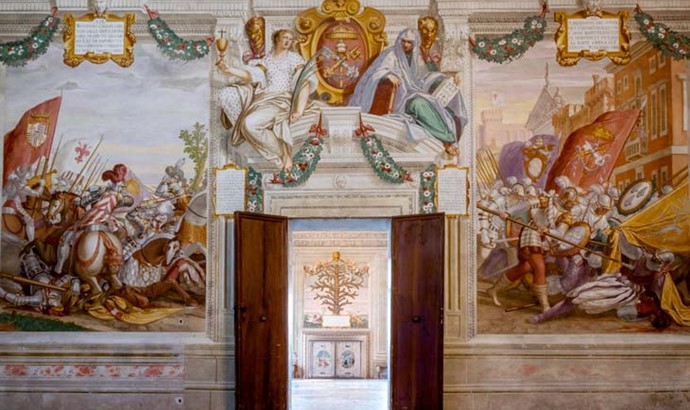 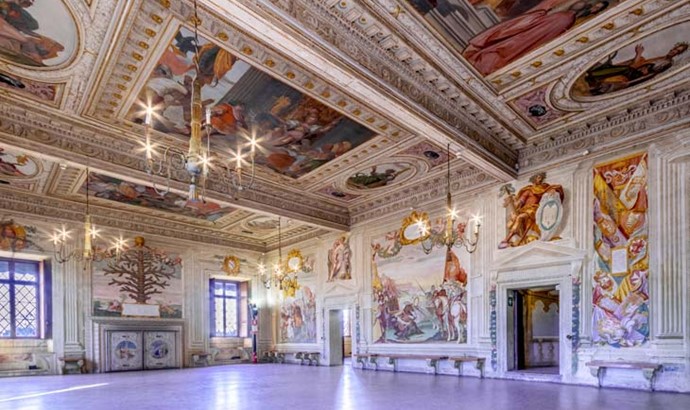 The Catajo Castle is a magnificent cross between a fortress and a Venetian aristocratic mansion. Located in the Euganean Hills, between Padua and Monselice, it is considered “the most unusual among the Venetian Villas”.

The Obizzis – captains of a free company, of French origin – built the Catajo Castle in 1570 to celebrate the glorious feats of their family.

Over the centuries, the castle was the venue of spectacular festivals for the international aristocracy, enlivened by jousts, staged naval battles (naumachias), theater performances, and dances. The piano nobile was frescoed by the famous artist Giovanni Battista Zelotti, who used this venue to paint one of the most important cycles of self-celebrating frescoes of northern Italy.

In the 19th century, the Catajo Castle was expanded and enhanced, becoming first the residence of the exiled Estes from Modena and then a Hapsburg hunting reserve. The Catajo Castle has been owned by the Dalla Francesca family since 1929.

Today, the castle is open to the public and everybody can attend guided tours, events and initiatives, in a fascinating journey in history through the courtyards, gardens, patios, and corridors dug in rock, as well as hundreds of rooms adorned with the wonderful frescoes by Gianbattista Zelotti.

In the various frescoed rooms of the main floor, on the broad terraces and in the monumental park, receptions for up to 200 people can be held. The many available spaces offer different settings for various stages of an event, even in the case of inclement weather. The choice of caterer and other services is up to you, but castle staff can advise and assist you every step of the way.

The large rooms on the “noble” first floor are well-suited for meetings, business receptions and events. The main room can host 140 people when set up in row seating, while the other rooms and panoramic terraces can host coffee breaks, cocktails or elegant dinners. The castle staff can offer support with set-up, audio and logistics services.

The park of the Castle of Catajo is the result of transformations that have taken place over the course of the centuries, and adaptations to various architectural and botanical influences. Created in the 17th century, it was partially altered in the 19th century in keeping with the period’s taste for English gardens. The garden contains two of Europe’s oldest magnolia trees, as well as a spectacular ancient exemplar of a sequoia, and visitors can also admire a large 16th-century fish pond covered with water lilies and a collection of citrus trees. After years of neglect, a project to completely restore the historic area to its prior state was carried out in 2016, with the restoration of all of the paths that had been overgrown, the old rose garden and floral plantings.