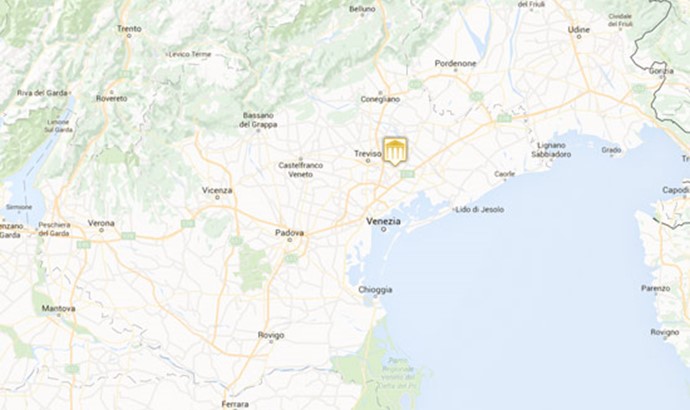 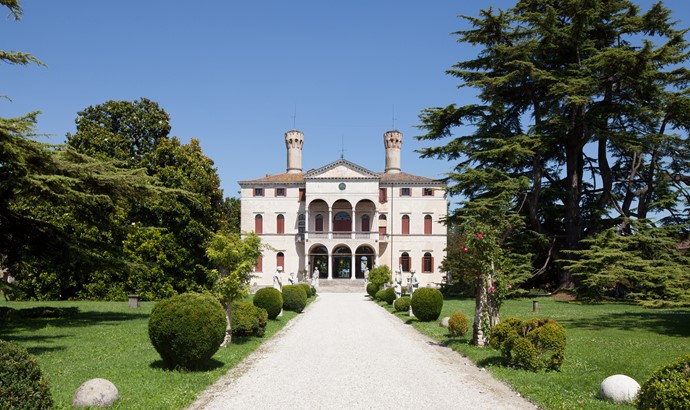 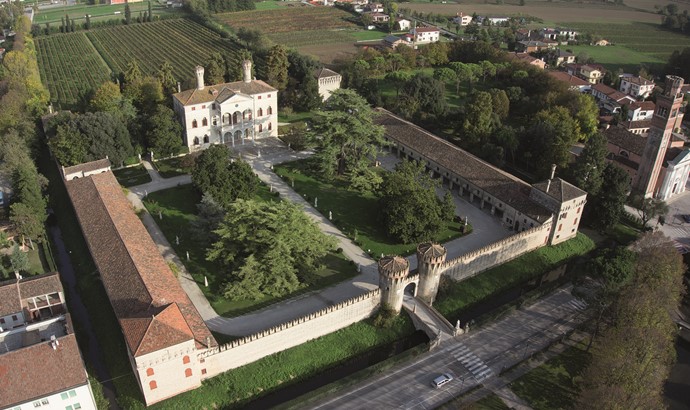 The Roncade Castle is over a thousand years old. A gift to the Counts of Collalto in '900, it was destroyed by Cangrande della Scala, then rebuilt in the 16th century by Girolamo Giustinian.

The Giustinians, a noble and prestigious Venetian family, lived in the mansion – formerly known as Villa Giustinian – until the end of the 19th century.Bequeathed to the Barons Ciani Bassetti, the castle has regained its original splendor.

Today, it hosts the winery Cantina di Vini Castello di Roncade and is open to visitors. Tourists can participate in guided tours and spend the night in the elegant apartments of the castle's Bed & Breakfast.

The Roncade Castle is the only extant Venetian Villa featuring medieval walls, with towers and keeps. The walls embrace a historical park including 30 marble statues, the barchessas, an ancient private chapel, and Villa Giustinian with its elegant halls and 18th-century furniture.

The landscape surrounding the Castle is dominated by vineyards where the Cantina di Roncade wine is produced.

Staying at Castello di Roncade is a blissful plunge into the everyday life of a Venetian Villa.

The apartments located in the towers, and the rooms in the main building have been flawlessly renovated to offer guests a truly comfortable stay.

Castello di Roncade is located in a strategic position to reach the best localities and landmarks of the Veneto region.

The atmospheric great halls, attractive Barchesse and historical gardens are perfect venues for conferences, banquets and wedding receptions. In Spring and Autumn takes place in Castello a prestigious fair which features works of art, quality handicrafts and floriculture, with more than 80 stalls.

The halls, placed inside the ancient wall, can also host congress and business meetings.

Hall A inside Barchessa 390 mq

Hall B inside Barchessa 156 mq

At the wine shop inside the Castle it is possible to buy and taste the wines produced by Castello di Roncade.

On Sunday and Bank Holidays only on special events. We recommend calling in advance.

Located along the Munich-Venice route and just a few kilometers far from the Sile river cycle path that connects Treviso and Jesolo, Castello di Roncade is a perfect stop for cyclists who are willing to discover the surroundings.

The beautiful formal garden is entirely surrounded by medieval walls and can be admired as you go through the gate between two round towers.

The walls are surrounded by a moat and by thriving vineyards.

The gate opens to a driveway, flanked and guarded by statues that represent Venetian soldiers known as “Schiavoni”, which leads to the Giustinian Villa.

There are four monumental trees - two Magnolia grandiflora and two Cedrus libani - as well as centuries-old specimens of Lagerstroemia indica that adorn the sides of the Villa's staircase.