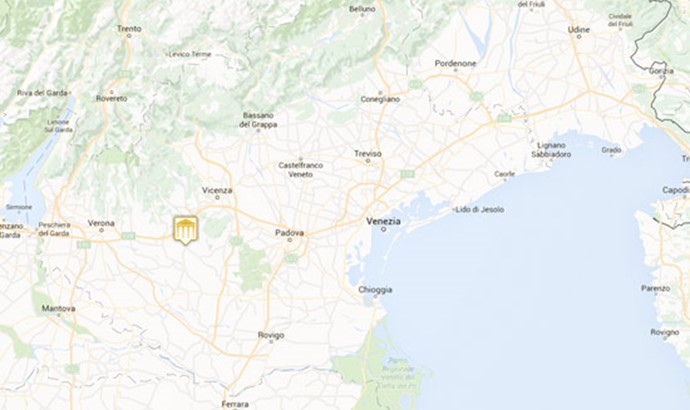 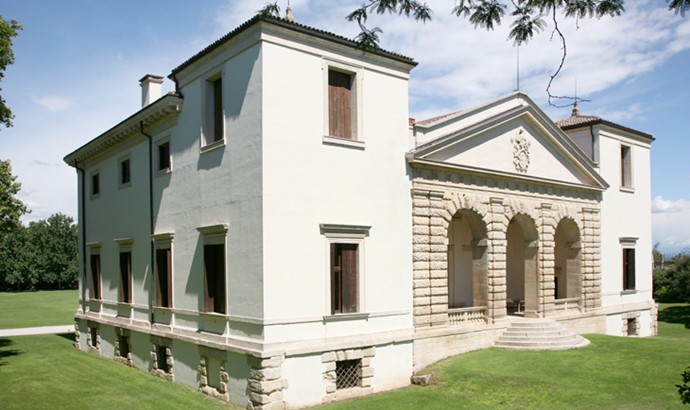 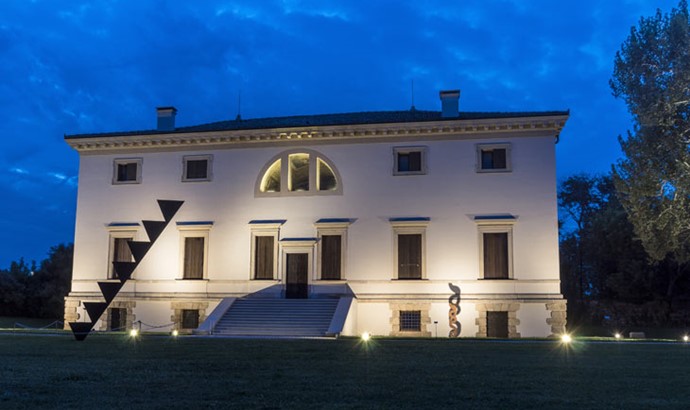 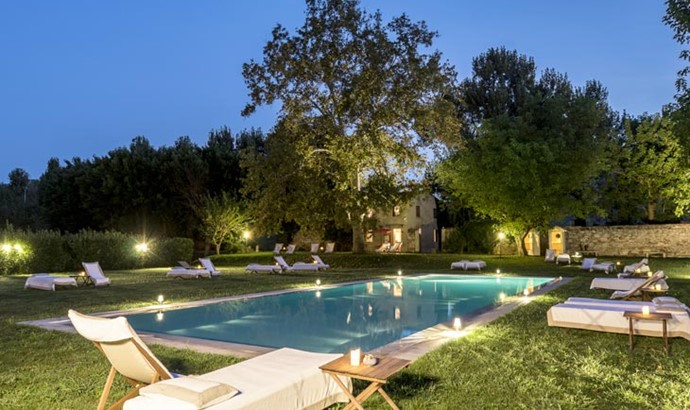 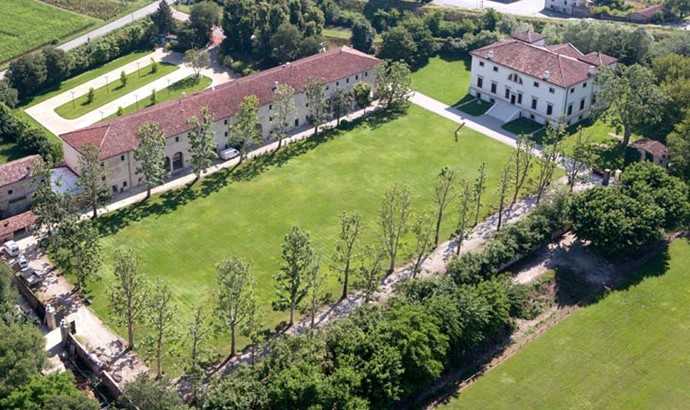 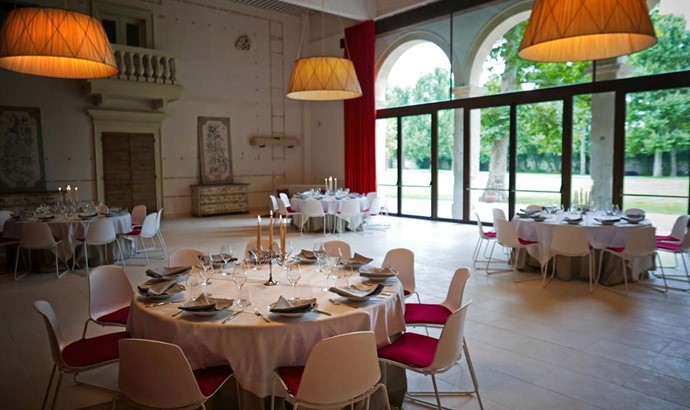 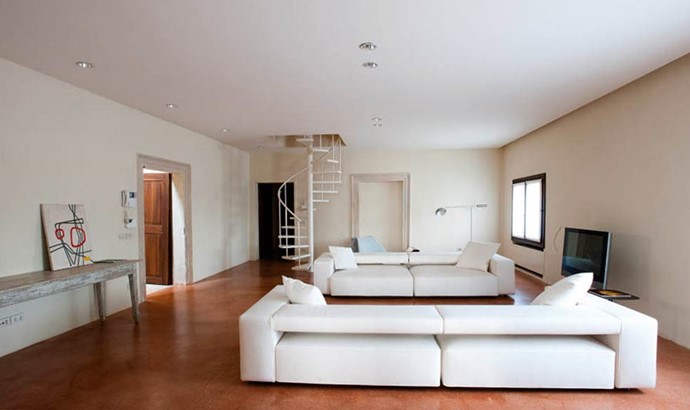 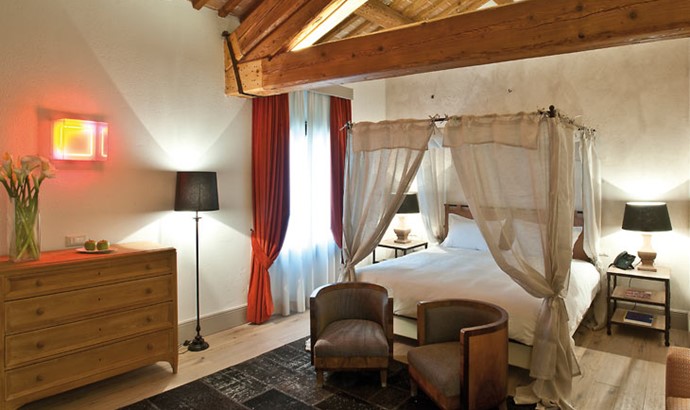 Villa Pisani Bonetti was designed by the great architect Andrea Palladio in 1541 and is one of the most representative works from his juvenile period.

The Villa was commissioned by the prestigious Pisani family and was built in 1544-1545 in Bagnolo di Lonigo. This project marked the beginning of the fertile collaboration between Palladio and the Most Serene Republic of Venice.

The structure of Villa Pisani Bonetti is inspired by the Imperial monumental style of Rome. As in all Villas designed by Palladio, the celebratory purpose is combined with a relevant role in farm management: properly situating the Villa was considered by Palladio as a fundamental step in the designing process. Villa Pisani Bonetti hosts frescoes attributed to Francesco Torbido, a disciple of Giulio Romano. The large kitchen is found on the piano nobile, a most unusual location, as it was moved there due to floods caused by the Guà river.

The Villa – perfectly preserved thanks to its subsequent owners – today is open to visitors for guided tours and events, and hosts contemporary art exhibitions.

The distinctive building “Barchessa”, originally a farm building featuring large arched porticoes, was initially used for agricultural purposes. Today it comes back to life in the 21st century after careful restoration and complete renovation.  Today, the preserved and enhanced “Barchessa” serves as a hotel, restaurant, and event location.

Cancellation policy: 1 day before - 3 days in advance if booked with guide

La Barchessa di Villa Pisani is located inside the historical Villa Pisani situated in the picturesque countryside of Northern Italy.

The Villa was designed by the Architect Andrea Palladio in the XVI century and is included in the UNESCO World Heritage Site "City of Vicenza and the Palladian Villas of the Veneto".

This country house offers today 15 exclusive bedrooms which have been refurbished, preserving the original structure and unique decor.

Each room has its own charm and beauty featuring artworks by Contemporary Art blending rare elegance with warm comfort.

This country house is the perfect place to enjoy quiet rest or to sunbathe by the pool.

On the second floor of Villa Pisani Bonetti, there’s also an apartment that you can rent all year round: the Palladio Suite.

It is a grand suite composed of a large living room furnished in modern cutting-edge style, equipped with Wi-fi and a 55" flat screen TV. Two windows overlook the scenic Guà river.

The master bedroom continues the avant-garde style with a wide Frau leather bed and enchanting design.

The bedroom also has a beautiful view of the inner park of Villa Pisani.

Flagship of the Barchessa di Villa Pisani, the restaurant Osteria del Guà, welcomes its guests for unforgettable suppers and lunches.

The location is the perfect setting for romantic dinners, evenings with friends, parties and events for small groups of people, or elegant business lunches.

Chef Vincenzo Di Grande and his skilled staff bring you tasty cuisine suitable for the most selective palate.

His unique culinary innovations bring new life to Italy’s traditional dishes. The baccalà or the carpaccio of black piglet with pear mustard and ginger are only two examples of his repertoire.

The ingredients used are fresh products from the local area including the vegetable garden of Villa Pisani.

First courses with homemade pasta open the way for meat or fish dishes of a culinary journey which satisfies all your senses.

The chef prepares tasty delicacies for everyone’s diet including vegetarians and those with food allergies or any other reason.

The Barchessa di Villa Pisani is perfectly equipped to hold any kind of family events such as weddings, banquets, and private parties.

We will also help you find florists, decoration outlets, photographers, music and entertainment services, and event designers to create your unique ambiance.

Villa Pisani is also the most fascinating backdrop to hold important ceremonies all year round.

Every corner of our prestigious villa, inside and outside, is the perfect setting for your gathering.

The romantic indoor and outdoorsettings offer an exclusive venue for an enchanting wedding ceremony. There is plenty of room to receive your guests and to hold the wedding reception.

The bride and groom might enjoy the fascination of the spacious Palladio Suite in Villa Pisani while their guests may appreciate the warm hospitality of our country house.

The Sala della Corte and the Sala del Granaio are two halls with services for all your needs.

You may reserve a complete package including bedrooms, commons area, and available services.

We will also help you find florists, decoration outlets, photographers, music and entertainment services, and event designers to create your unique ambiance.

The Sala della Corte and the Sala del Granaio occupy more than 300 sq. meters and can hold up to 250 people.